Esports was going through a tough time during the pandemic. But did any of the organizations take advantage of the situation? Esports Charts presents the ranking of the most popular esports clubs in the world and explains why Liquid lost its leadership, why NAVI rose rapidly, and which team set the peak viewers record of the year.

The ranking of organizations has changed quite a lot compared to 2019. Previously unrepresented Korean clubs (mainly those who have teams in League of Legends) hit the top. At the same time, many popular Western organizations left the ranking: Vitality, Evil Geniuses, Virtus.pro and Ninjas in Pyjamas. This was largely because of the cancellation of CS:GO majors and The International in Dota 2.

In the metric, we took into account hours watched of teams from all disciplines in which the organization is represented, on all platforms where broadcasts were held. The only exception were battle royale games: they are not included. 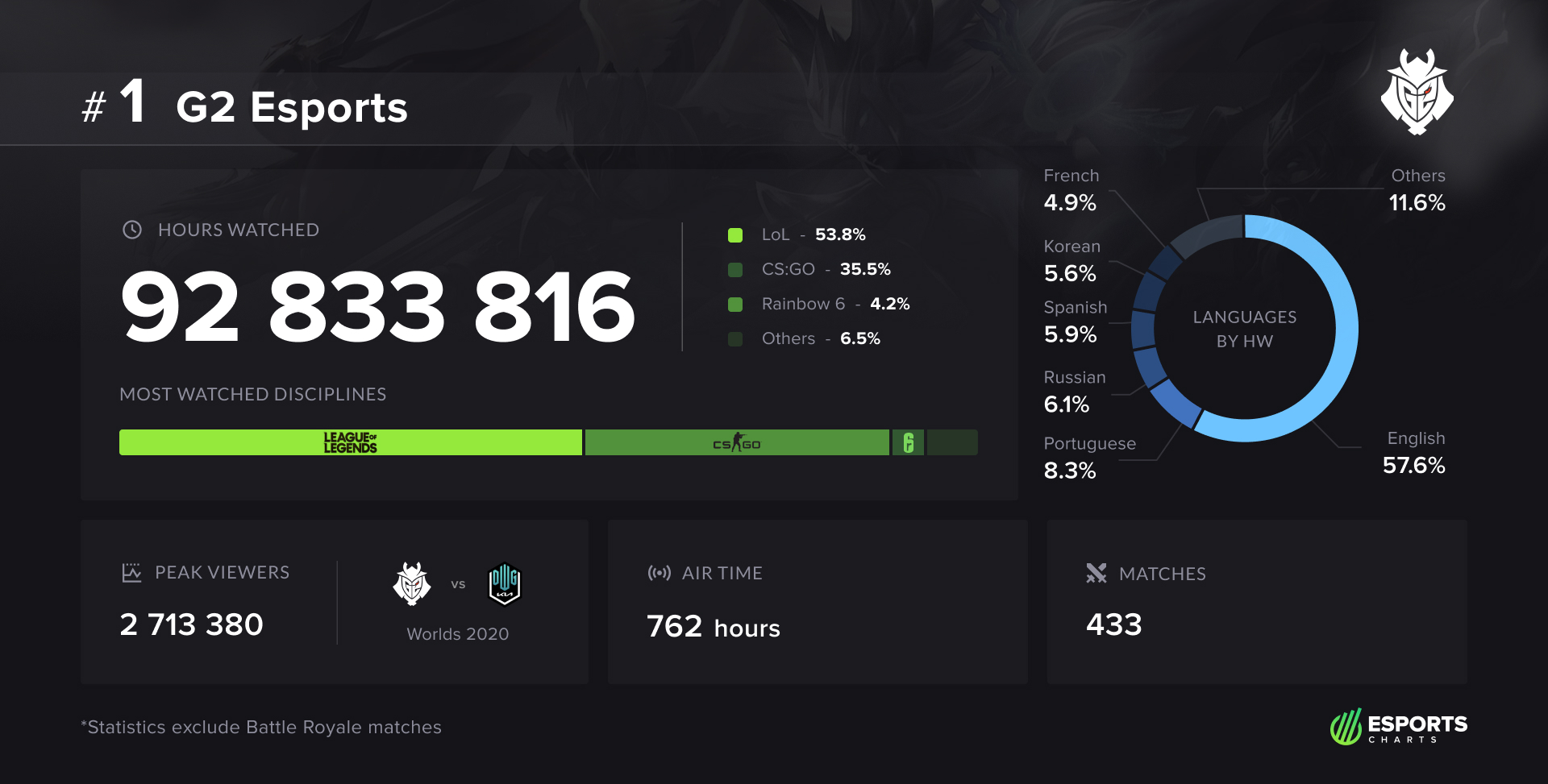 Carlos “ocelote” Rodriguez can only be applauded. Every day he leads his organization to new heights. At the end of 2020, it was G2 Esports that became the most popular esports organization of the year.

It should be noted that the club scored 9.3M hours watched less than in 2019, but this did not prevent the organization from taking the first place in the ranking. It is also worth mentioning that by the end of the year, G2 was recognized as the best esports team / organization at The Game Awards and The Esports Awards: as you can see, the statistics often match public opinion.

Of course, the main asset of the organization is the League of Legends team, which brought the club almost half of all hours watched (48.7M). The team has already won everything that is possible in the European league, but it still can not win the World Championship: this is what all the fans of G2 and ocelote himself dream about.

The second most important roster for G2 is the CS:GO team. It started off very well last year, but then started having problems: the team often left the competitions in the early stages. As a result, not just anyone but NiKo replaced JaCkz! Moreover, its announcement was as informal as possible: it seems that only G2 can afford this among Western organizations.

The club also enjoys success in Rainbow Six Siege (recently they won the European league), Rocket League and Valorant: but even these teams are unable to compete with CS:GO team alone.

G2 is being G2: the most informal social networks, high-profile transfers (Rekkles from Fnatic is enough to mention alone), and large sponsorship deals (have you seen the G2 ad with Adidas?). The club is clearly not going to stop: while ocelote is at the helm, we will hear about G2 very often.

They are hiring! Check out open roles.