“Magic Leap has sucked a lot of funding out of the room.” AR startup Mira has shifted from consumer to business customers, and it seems to have found its audience.

There was a time, not so long ago, when it seemed as if the future of computing lay in augmented reality — an evolution that was just around the corner. We were going to play games with virtual characters flying around our living rooms, catch up with distant friends appearing as holograms in front of us, and replace the office desktop with a pair of connected glasses.

Magic Leap, the most prominent AR startup of the time, was on its way to raising more than $3 billion in funding over a decade from firms like Google, Warner Bros., Alibaba and AT&T. After years of secrecy, it released its first headset in 2018. But it was not well-received by customers. Last month, founder Rony Abowitz announced he would be stepping down as CEO, while the company pivoted to enterprise offerings.

It’s a common outcome with consumer product startups. The old aphorism in tech — “hardware is hard” — underlines the belief that the opportunity to invest in making physical goods is often outweighed by the difficulty of getting people to buy something new. For many startups, the model has unfolded the same way: come up with an idea, secure funding to turn it into a reality, realize it’s much harder to build at scale than you thought, run out of cash, fold.

That could well have been the fate of Mira, an AR headset startup founded in 2017, which aimed to bring low-cost augmented reality games and experiences to regular people. But the company came to realize the steep pitch of the mountain it was climbing and switched things up, adopting a focus on business applications that may well have secured the company’s long-term success. It’s a path that other companies wishing to jump head-first into consumer products would do well to heed.

Before they were co-founders, they were classmates. Benjamin Taft, Montana Reed and Matt Stern met in 2016 as undergraduates at USC, as part of an innovation program run by music moguls and Beats By Dre partners Jimmy Iovine and Dr. Dre. One of the classes centered around making technology more human, Taft said, and captured the students’ interests at around the same time that the Kickstarter campaign for the original Oculus Rift was kicking off.

The young men had some experience in the virtual reality industry. Stern had worked at Sony on PSVR, and Taft had been at Daqri, an AR headset company that recently suffered its own spectacular collapse. They became enamored with the technology and its potential.

The group decided they wanted to get into augmented reality, still a burgeoning field at the time. They pooled their money to buy a Microsoft HoloLens developer kit, which then cost $5,000. “If we weren’t working on AR,” Taft explained, “we weren’t working on the future,” While they enjoyed using the HoloLens, they found it too cumbersome and expensive for students and developers who wanted to build AR applications. They figured that what the market was lacking was an accessible AR device. So they hacked together $100 worth of smartphone parts they bought off Alibaba, 3D-printed a headset around an iPhone, and chopped apart a plastic fishbowl to make the lens.

Still in contact with Iovine, the nascent team showed him a demo on their Frankenstein’s monster of a machine, playing a Bruce Springsteen concert in AR (Iovine had been Springsteen’s producer early in his career). He liked it enough to put them in touch with Sequoia Capital, which saw sufficient potential in the early demos to lead their seed round.

The group turned their hacky demo into a production headset in 2017, which is when I was first shown a demo. The technology worked well, allowing me to play games with the co-founders on a table in front of us, using my own phone strapped into a Mira headset. But there was a downside: Wearing the gear sort of made you look like Dark Helmet from “Spaceballs.” 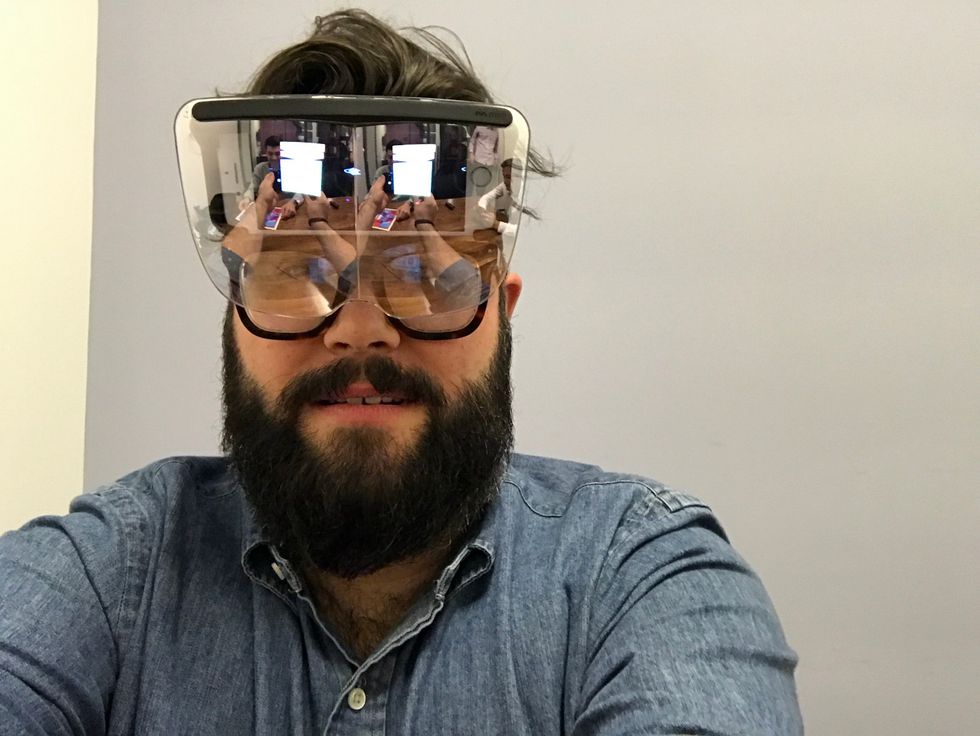 This reporter wearing a Mira headset in 2017.Photo: Mike Murphy/Protocol

This may well have factored into why the company failed to find much of a consumer audience. But really, Mira was looking to find developers interested in creating applications in which aesthetics wouldn’t matter as much. After all, who cares what you look like if you’re in your own living room playing with friends? What they hadn’t considered, not yet, was that one one of those situations might revolve around using AR to make workplaces safer.

Want to glimpse our metaverse future? Theme parks are already on the case

Mira, From <$20 Fishbowl To New Mario Kart Ride at Universal Japan (In About 4 years)