When Mike Norris graduated from Baltimore’s Stevenson University with a degree in business information systems, he thought he’d quickly nab an entry-level tech job. Instead, he found himself working as a security guard patrolling parking lots, earning $7.50 an hour.

“I graduated in 2001, during the dot-com bust. There weren’t jobs anywhere for my skills,” said Norris. “In the end, I was happy just to have a job.”
Today, Norris, now 40, is a senior software engineer earning a six-figure income. He’s been able to buy his first car, his first house and even owns a rental property.
Norris credits his success to a five-month training program he participated in at software engineering services firm Catalyte. Based in Baltimore, Catalyte trains people who qualify for its program to become enterprise software developers, then offers them placement in their two-year apprenticeship program. During that time, they work on projects with a number of the company’s clients, including Nike, PayPal and Blue Cross Blue Shield.
Norris has now been with Catalyte for 13 years. He’s worked on more than a dozen projects with clients, and has even taught new recruits.
“There are very few places in the world where a person gets an opportunity just based on aptitude,” said Norris. “Here is an opportunity that’s changing lives.”

Catalyte has been identifying, training and hiring untapped talent from underprivileged communities for the past 19 years.
“These are individuals who go from having absolutely no experience with computer software to having some experience,” said Michael Rosenbaum, Catalyte’s founder. “But what they all show, regardless of background, is innate aptitude and cognitive ability to be great software developers.” 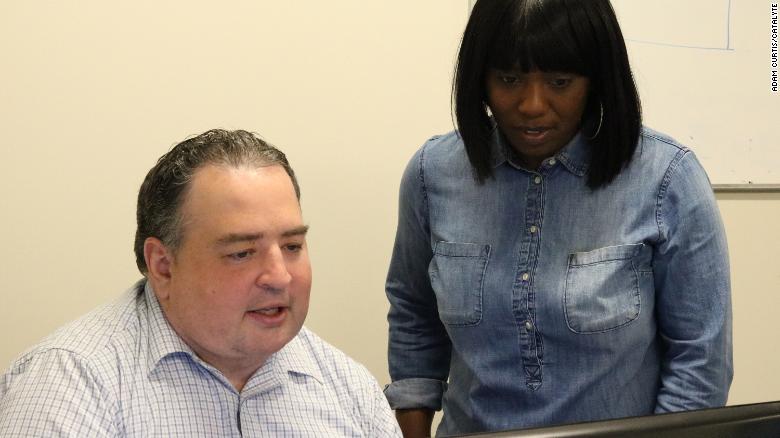 Mike Norris, a senior software developer at Catalyte, with colleague Alicia Waide.
Catalyteoperates training centers in Baltimore, Boston, Chicago, Denver and Portland, Oregon. It’s aiming to create a diverse technology workforce by eliminating thebiases that cause employers to overlook talent in underserved communities.
“[These biases] leave a massive amount of people in the United States undervalued by a labor market that relies on resumes,” said Rosenbaum, a former Harvard economics and law fellow who worked in President Bill Clinton’s Council of Economic Advisors in the late 1990s. “They look for other people who are like them. They don’t actually know if that other person is going to be good. Their credentials correlate with socioeconomic backgrounds.”
Catalyte recruits its trainees in a variety of ways, including through Craigslist ads, classified ads, job postings and community forums.
“The ads help in drawing a large pool of people, many of whom don’t necessarily have a LinkedIn profile,” said Catalyte’s CEO Jacob Hsu. “It’s a spectrum of folks, hackers in the basement, public school teachers, a former Taco Bell worker.”
Norris found an ad for Catalyte on a Baltimore job website in 2006. He had been looking to leave his security job. “The ad was for free coding training,” he recalled. “And if I passed, I would be hired and paid $10.10 an hour.”
Those who apply undergoan online assessment that gauges aptitude rather than skill level.
“There is a math and language section,” said Hsu. “But we aren’t looking for the right answer. We analyze how you interact with the test, how you think, synthesize complexity and problem solve.”
He says 11% to 18% of people who take the test end up passing. 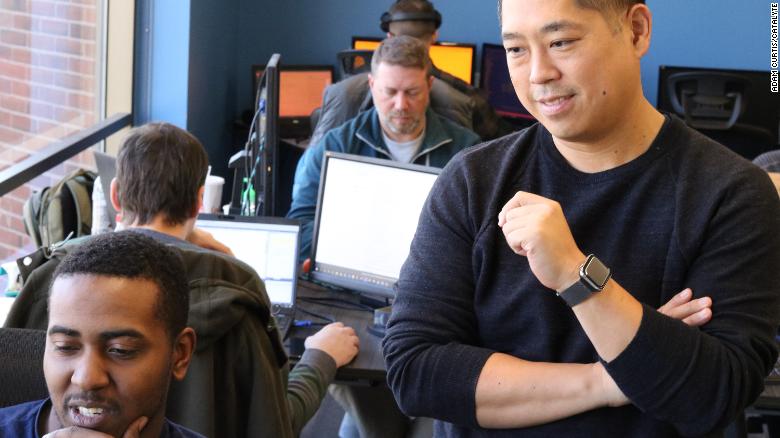 Catalyte CEO Jacob Hsu hopes the company’s tech workers will be a more attractive option than offshoring.
Those who make it through begin 20 weeks of paid training to become software developers. “In some places, we pay minimum wage. Elsewhere, it’s a stipend,” said Hsu.
After they graduate from the program,the trainees are then hired as full-time employees and placed in Catalyte’s two-year apprenticeship program, earning about $40,000 a year, said Hsu.
Catalyte’s client services include building and maintaining backend data management platforms, creating systems to help improve business performance and building and testing new products.
“It’s intense work. They get deployed on teams, working on projects for Fortune 1000 companies,” said Hsu.
Catalyte has trained and hired roughly 2,000 developers since the firm was launched. Within five to six years, its developers are earning close to six figures, said Hsu.
Most hires stay on for about four-and-a-half years, then take a tech job somewhere else, said Hsu. Catalyte grads have been hired by Nike (NKE), Microsoft (MSFT) and Amazon (AMZN), he said.
Catalyte is on track to graduate another 500 engineers in 2020. The firm expects to be profitable in the first half of 2020 and log $80 million in annual revenue.To date, the business has raised $50 millionin funding from investors, including AOL cofounder Steve Case’s venture firm Revolution’s Rise of the Rest fund, Palm Drive Capital and Cross Culture Ventures.

The workforce mirrors the city it’s based in 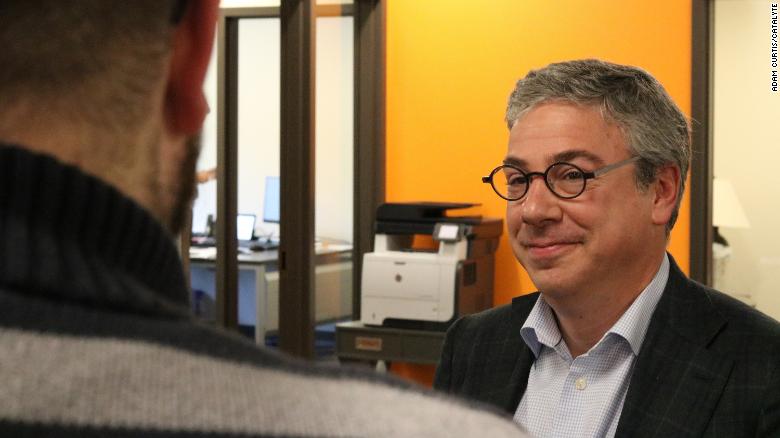 Catalyte founder Michael Rosenbaum is seeking to take the bias out of tech hiring.
In each of the cities it currently operates, Hsu said Catalyte’s tech workforce reflects the local demographics.
“In Baltimore, for example, the metro area is about 28% African-American. Historically, over time, our development center there has seen a 27.5% African-American class.”
This homegrown pipeline of software engineers and data scientists can enable companies to meet their hiring demands more efficiently and cost-effectively, Hsu said.
“The whole tech industry is built around finding this skill set overseas because you can pay less. But that doesn’t take into account productivity,” he said. “By hiring locally, you can end up with a team half the size, that costs less and delivers more than a team in China or India.” 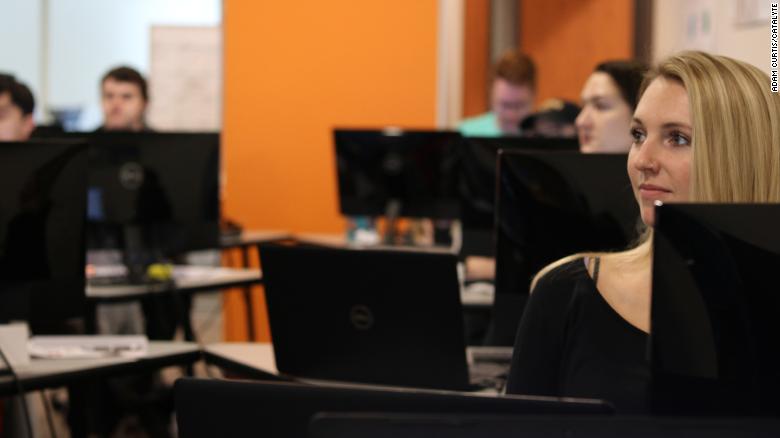 Trainees attending Catalyte’s five -month program to become software developers.
He hopes it will lead big US tech companies to bring jobs back from overseas.
“The way Catalyte is onshoring versus offshoring tech talent is breaking conventional wisdom,” said David Hall, managing partner at Revolution’s Rise of the Rest seed fund.
The company hopes to open training centers in additional cities. “If we can scale the model, we can take people from all walks of life and in two years, turn them into elite engineers, folks that Google would hire,” said Hsu.
This article was written by Parija Kavilanz for CNN Business

Baltimore group seeks to ‘RetrainAmerica’ for jobs of the future

Looking for a new career? RetrainAmerica will prepare you!

Catalyte closes another multimillion-dollar funding round to start 2020

Catalyte Expands to the Northeast with Boston Office

Catalyte uses AI to test unlikely engineers for their potential

Catalyte, effectively preparing people for the future of work